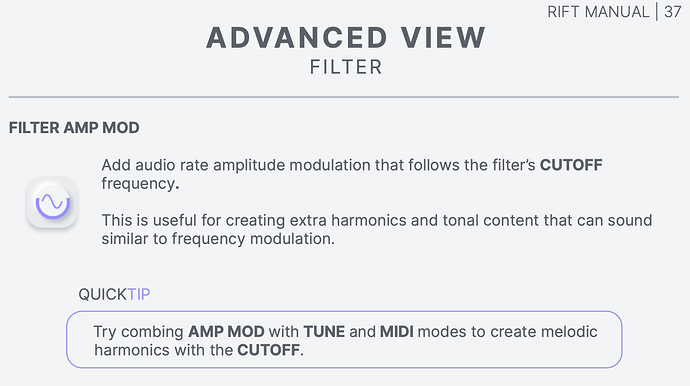 I love your Rift plugin, it has definitely become one of my weapon for sample modulation!

I was wondering if, in later versions, it was possible to add Filter Amp Mod knob mapping both within the plugin and as external automation in Ableton. It would be great to be able to modulate this parameter and create such crazy effects using the Rift filter.

I think an external sidechain modulating the envelope follower would have same effect no? I might be misunderstanding the difference with “amp mod” tho…

I think an external sidechain modulating the envelope follower would have same effect no? I might be misunderstanding the difference with “amp mod” tho…

Nope @kutchutozov I don’t mean the possiblitily of sidechain it using the follow envelope. The Amp Mod knob in the Filter section is very cool. That is like a frequency shifter of the filter cutoff and it add some amazing freq modulations. I think this was designed to change the tone of the filter and create melodies using it with the Filter Tune and Midi modes. Currently it is not possible to map or modulate this parameter. But I just think it’s very nice if you can map this knob with LFO or Follow Envelope in Rift or as external parameter in Daw.

Agree!
I was very disappointed when I discovered that it is not possible to modulate this parameter even by mapping it in the DAW.
It would be something very useful indeed.
Apart from that, sound fantastic and so distortedly clean!
Thanks, Devs.

Thanks @Sarah_De_Carlo for your feedback, I notice that your website end with .it, are you Italian sound designer??

Yes, I’m a trailer composer and sound designer from Italy.

Any feedback on this?

Apologies for the late reply — been a busy week!

We tried to make Amp Mod automatable but we ran into a limitation with VST2 where adding new parameters would break any already existing automation in people’s projects. Resigning automation to different parameters, etc. Obviously that would not work, and we actually considered dropping VST2 support lol. Our modulation system is built off of those same parameters.

Anyways, it’s unfortunate, but there’s no easy solution without ripping apart the codebase and then doing a bunch of testing to make sure it’s still recalling correctly for people. It’s possible that we’ll drop VST2 and add it in the future.

A bit of a workaround I found while getting amp mod set up is using the filter resonance to boost the amp mod signal. You can set amp mod fairly low and then modulate resonance to get a similar effect as modulating the amp mod itself.

Thanks @ben.minimal for the support and for all your work

I’ll trying your tips, thanks